In case you’ve been off linguistics Twitter for the last week, you should know that it coniptioned last Wednesday. This is what happened.

A study was dropped (ya, academics drop papers) that claimed that in countries where the dominant language allowed pronouns to be omitted, education suffered.

There were a lot of hot takes with linguists sashaying into Twitter for an opportunity to drag this quote unquote study.

Here are the problems with it as mined from Twitter:

This study by Horst Feldmann (2018) is not based on current research in linguistics. The “recent” research in that is referenced in the introduction is a baloney economics study from 2013 by M. Keith Chen. It was dragged in its own time for its interpretation of the now infamous Theory of Linguistic Relativity.

Theory of Linguistic Relativity: This a nearly century old study that claimed that an individual’s thoughts are restrained by the languages they speak. It is also known as Whorfianism.

A heck-ton of studies over the last 100 years have attempted to prove or disprove this theory. These days, linguists generally accept that language does or might have some effect on thought, but that we’re not quite sure how large that affect is or might be. I’m not going to get into it here, but if you want to learn more, get reading!

Feldmann, like Chen before him, ran with what we call the strong version of the hypothesis. He boldly claims that “…language shapes speakers’ mental representation of reality…” which it doesn’t. If Feldmann had studied linguistics, he would have known that.

This leads us to the second major issue: 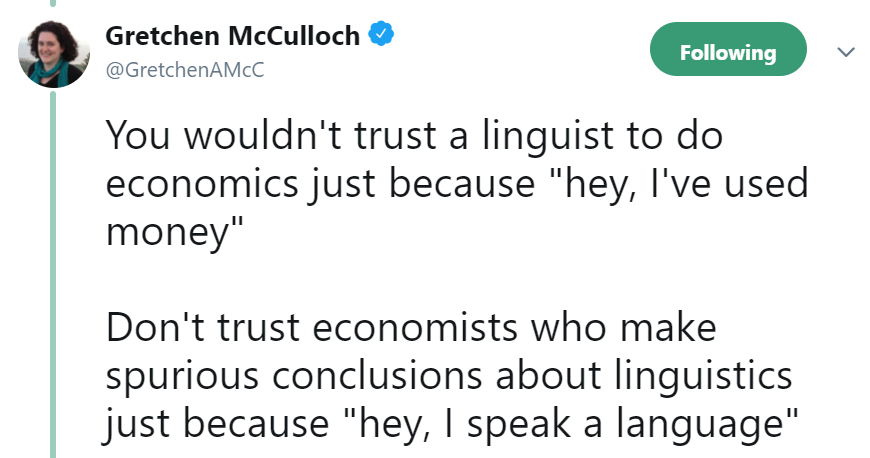 @gretchenmcculloch compared this type of study to a linguist writing an economics paper. @sesquiotic pointed out that the study was not even co-authored by a linguist. He tweeted that the study has a “crib-toy use of linguistics” and that its chain of reasoning and supposition is patently problematic.

This is all a part of the invisibility of the linguistics field. @adamCSchembri pointed out that somehow, linguists aren’t considered experts by academicians in other fields.

But since Feldmann went ahead and decided to act the linguist anyway, let’s look at his premise:

The premise of the paper is that there are languages that license the dropping of the pronoun before a verb. That’s true. A common example is Spanish whose speakers could say “yo hablo” (I speak), but can use just the “hablo” part if they want. Ok, so that’s an incredibly overly simplified explanation, but that’s for another time.

What Feldmann got wrong was claiming that English does not license the dropping of the pronoun. Actually speakers of English do it all the time. For example “do you speak English?” “Sure do!” or “Guess so.”

Yep, that’s pronoun drop. So the premise is wrong. This brings us to the bad linguistics of it all:

@sesquiotic: the study doesn’t include actual linguistics and makes some pretty big claims about linguistics.

This paper is full of bad linguistics so here’s a list of a few that came up on Twitter:

@eviljoemcveigh: the linguistics is garbage so regression methods, covariates, and other statistical decisions are uninformed.

What do you get when you take an outdated hypothesis, add a false premise, and stir in some bad linguistics? 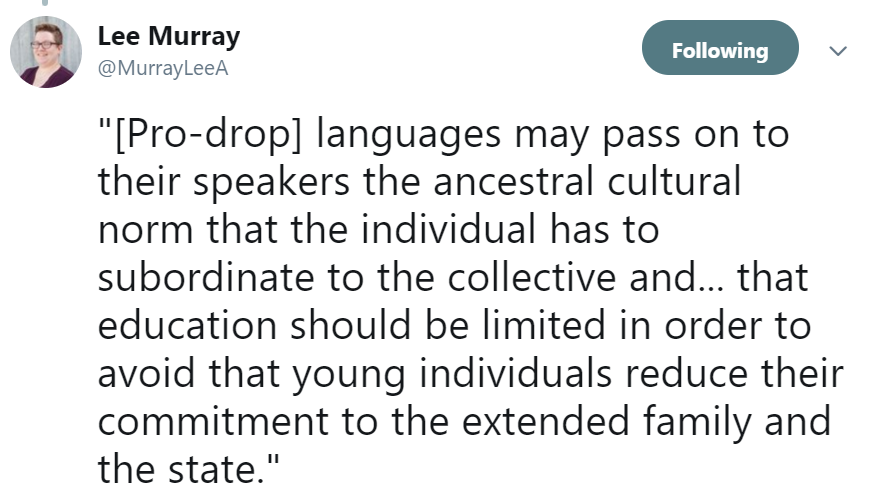 Feldmann concludes that dropping a pronoun has a “negative effect of human capital” and that speakers of those languages have less education. Many people on Twitter were reminded of a similar conclusion by the Church of the Flying Spaghetti Monster in an open letter to the Kansas School Board.

The thing is, if you’re not putting in solid research and defined linguistic variables, the conclusion is moot. Feldmann’s conclusion is punching down at countries with less access to education and claiming that no one’s to blame because language. But there are guilty parties in the disparities in education around the world. A linguistics website isn’t the best place to learn about them, but this paper isn’t just bad linguistics, it’s bad anthropology, bad economics, and bad statistics, bad research design, and bad critical thinking.

This bish’s conclusion? Sashay away, Feldmann!

Recommended for no bishes!