Baker and McEnery (2017) wanted to find out what the public representation of gay men was in the 1700’s. Of course they weren’t called “gay men” back then and there was a broad range of male-on-male activity that guys could engage in to be considered anything from a sinner to a sorcerer. So this is actually a look at the public representation of guys who did what Jonathan Van Ness would call “gay stuff.”

Unfortunately this study only covers gay men because of how little writing exists about other queer people from that very binary time. The approach was to explore how gay men were written about. And let’s remember that gayness wasn’t just taboo or frowned upon, it was a capital offense and was only legalized in the UK in 1967.

They used the Early English Books Online Corpus version 3 (EEBO v3), which is great, but unfortunately it’s got so much religious stuff (from meeting minutes to plays and journalism) that results are a bit lopsided.

As mentioned above, the large number of religious texts skewed the results. For example sodomite is by far the most frequent term, but it’s mostly used in a Bible-y context (you know, the whole Sodom and Gomorrah thing). The word collocates the most consistently with Genesis, filthy and some guy called Lot because the Sodom and Gomorrah story was in a bit of the Bible called Genesis and the city Sodom had the cute nickname Filthy Sodom. And also Lot was there, I guess. In the Bible-y sense, the word  connoted wickedness, sin, and other deeply negative things, but not necessarily gay stuff. So none of that information is particularly relevant to the public perception of gay men in the 1700’s.

Just as an interesting side note, the word sodomite declined in usage over the century while at the same time there was a rise in church doubt and anti-catholic writings. Also, sodomite collocates with harlot and whore, the only apparent link to sex of any kind.

The other thing is that gay-stuff was just really the most marginal. There was a ton of censorship, with trial records being destroyed and there’s no evidence in the EEBO-v3 of any man self-identifying as ‘into dudes’ because they could have been imprisoned, had their wealth seized, or even been put to death. So what remains in writing is heavily prejudiced, negative, religious, based in mythology, and controlled by the homophobic patriarchy.

Finally there’s the problem of the searching part. Like, what were they to even search the corpus for? They couldn’t search any of our modern terms like homosexual, gay or queer, so then what? What they did was familiarize themselves with the corpus and use their own knowledge and words from the Lexicon of Early Modern English (LEME) and the Historical Thesaurus of the Oxford English Dictionary. They also found more words as they went through. Armed with all the terms for homosexuals and male prostitutes who serviced men they could find, they dove in.

I took all the words McEnery and Baker searched for and all the words they found in EEBO-v3 and presented them in a dictionary format to accompany this post (click here for dictionary). When possible, I’ve included the metadata from the paper like frequency in the EEBO-v3, era, and definition. From my own brain parts I contributed part of speech and pronunciation. The definitions are those that Baker and McEnery arrived at through collocational analysis. Those without definitions weren’t found in the corpus or weren’t used in a way that allowed for analysis.

Side note: My intention is for this to be fun because some of the words sound ridiculous to our 21st Century ears (he-strumpet comes to mind), but I would like to acknowledge that none of these were kind-hearted terms. They represent oppression and hate written into law. These laws penalized anyone the cis-gendered heter-normative patriarchy found threatening. I went into this study with a love for lexicography, polysemy, and history, but it’s impossible to explore all of these words without experiencing a deep sadness and regret for the centuries of suffering these words represent.

Seems like only people who thought homosexuality was deviant wrote about it and wrote meanly so. There isn’t a single self-referential use of any of these terms in the whole corpus. However, it is definitely interesting that sexual orientation was at least referenced because there are scholars who claim that homosexuality wasn’t conceivable at that time. These words seem to argue against that.

Also cool is that there are so many different terms. Which to me says that there wasn’t just one concept of a man who was into “gay stuff,” but a variety of different ways to get involved. Sodomy could lead to execution, but ganymede and catamite weren’t accompanied by legal sentences. My favorite realization is that effeminacy wasn’t considered an indicator of sexuality. Apparently, it began to be associated with male homosexuality in the next century at which time guys who were afraid of retribution had to stop kissing each other in greetings and holding hands in public. Finally, it’s interesting that foreign languages and ancient Greek and Roman sources played a big role. And many authors described “these people” and “their acts” as being outside of England. So xenophobic.

Baker and McEnery have one final note for corpus linguists: get back to the text and get into concordancing. It’s called close reading and it involves looking beyond your five word context. Try it. I know I will be. 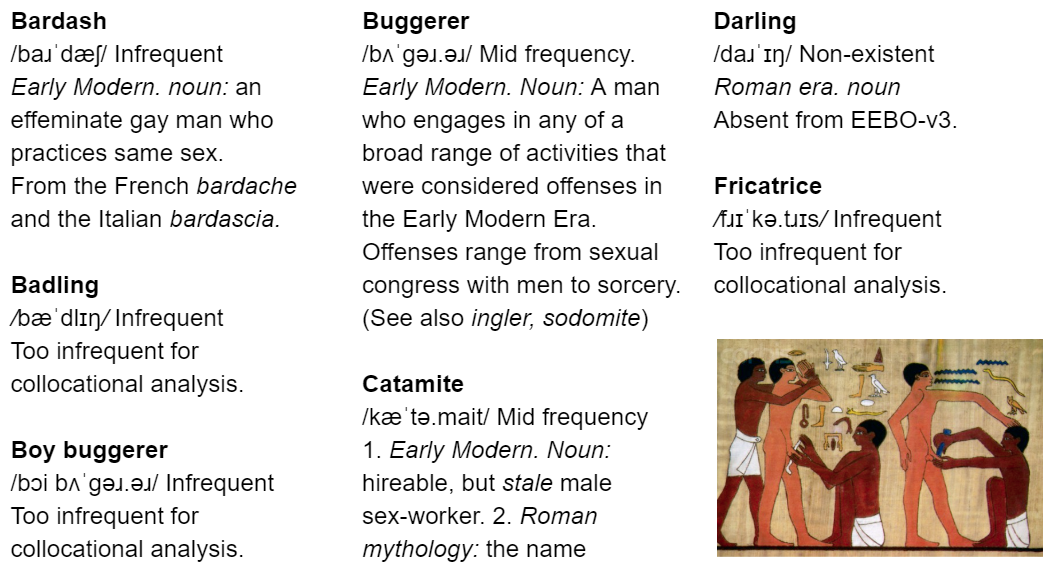 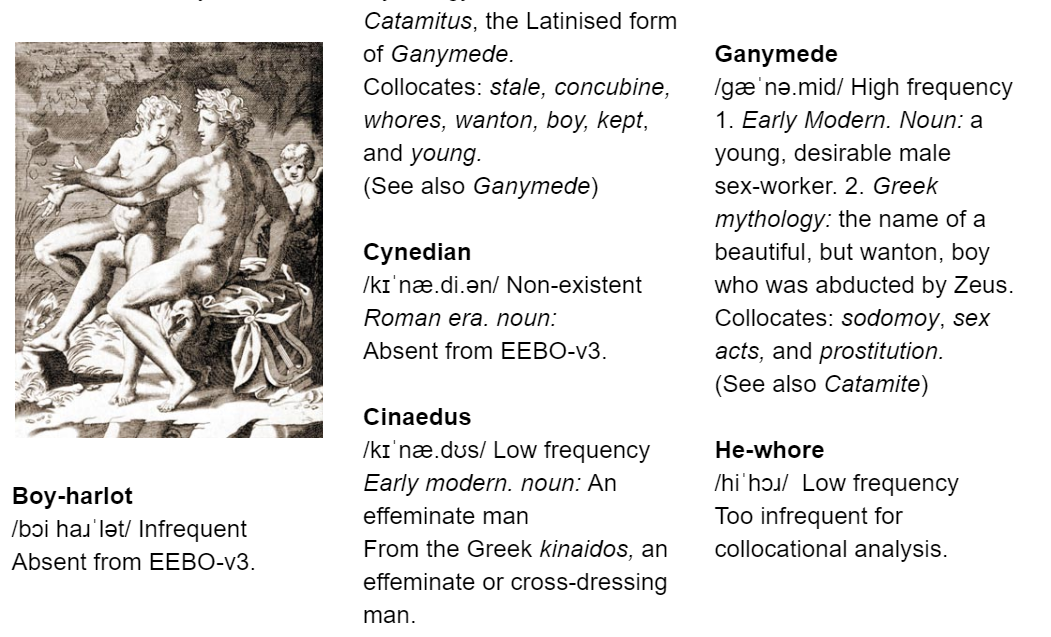 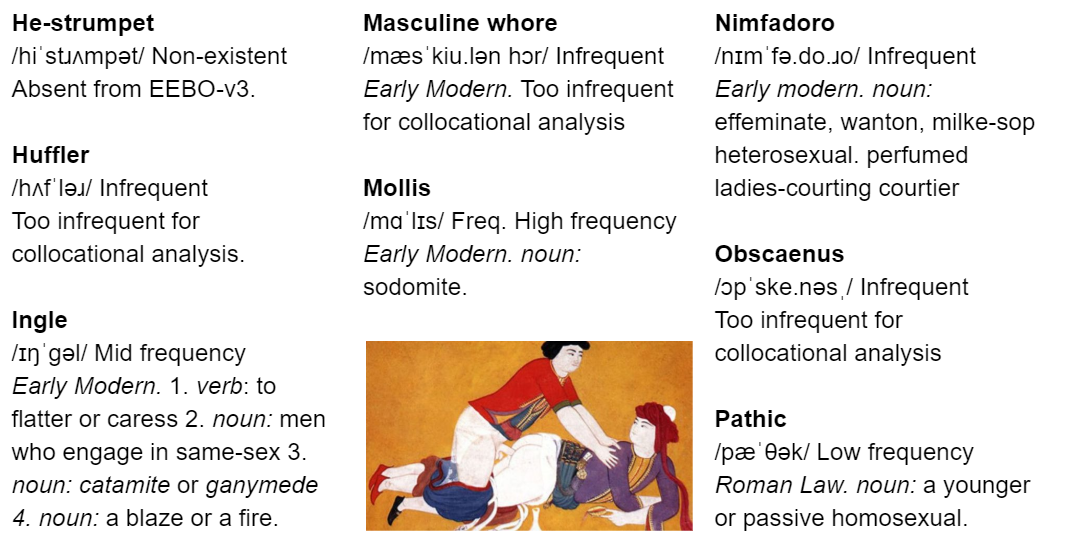 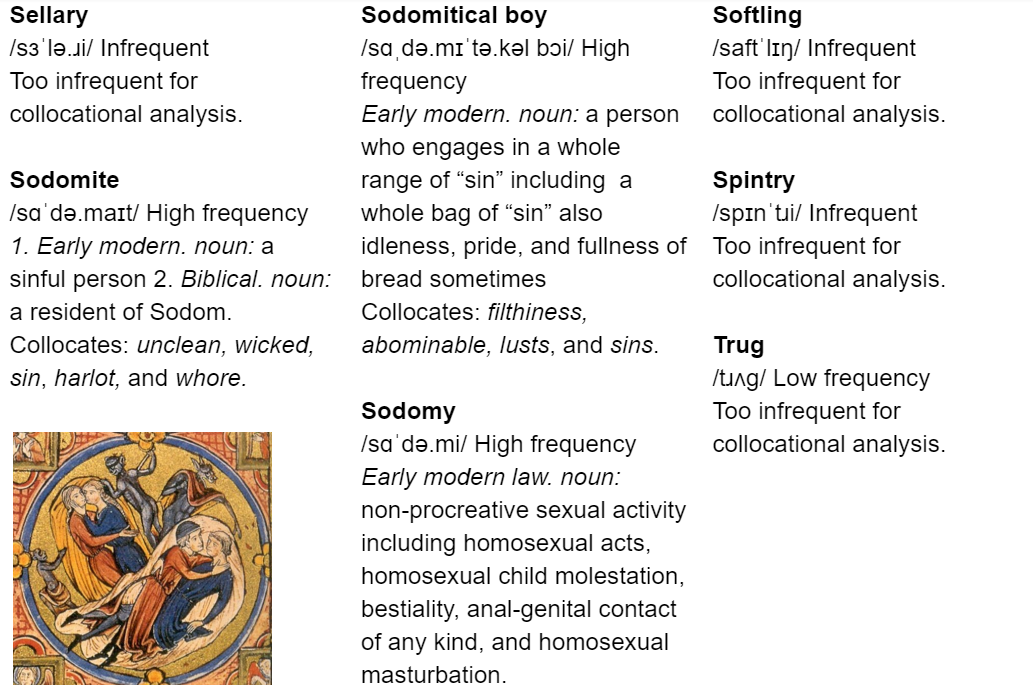 Years ago at a New Year’s drag show, the queen hosting the event said of me and a couple friends,  “Look at these trashy whores from Virginia!” as we took some seats near the stage. I was mortified, but my bold friend tried to avenge our honor, “We live in DC!” The drag queen clapped back by mocking her outfit. This was my first experience being on the receiving end of a drag queen’s withering remarks, and as three straight women in a gay bar angling for good seats to the show, we had it coming.

If you have been to (or performed in) a drag show, you have likely witnessed or experienced the hilarious and creative insults skillfully employed by drag queens. Sean McKinnon of Indiana University takes us on a linguistic journey of this practice in his paper “Building a thick skin for each other” The use of ‘reading’ as an interactional practice of mock impoliteness in drag queen backstage talk (2017).

If you are not steeped in drag queen culture, you may not be familiar with the practice of ‘reading.’ Who better to tell us what it means than a crowdsourced dictionary by fans of drag queen royalty, RuPaul?

Like that time in Mean Girls when Janice said Damian was too gay to function and it was funny, but when Cady repeated it to the Plastics and they sneered and wrote it in the Burn Book, and Cady was like ‘Oh shit maybe it’s only okay if Janice says it,’ and then the Burn Book was distributed to the whole school, and Damian saw it, and Janice was all indignant and was like ‘That’s only okay if I say it!’

It’s like that, guys. In-group, out-group. Know your place.

The majority of existing research into how drag queens use language has analyzed language used during performance, in interviews, or from media. This paper is unique because McKinnon was able to record and transcribe almost 3 hours of backstage talk between 4 drag queens before and during a local drag holiday show.

His research also included an interview with Eva, the show director and hostess of show, who was one of the drag queens backstage. When McKinnon asked her about a particular interaction backstage, she brought up reading unprompted saying, “Reading is about finding something that you know the other person is kind of self-conscious about, and picking on that. In a playful way.” She later elaborated, “and it’s supposed to be funny, reading is supposed to be funny and creative. And that’s the thing, it’s not like “oh girl well you’re a bitch and you’re ugly,” that’s not reading, that’s just being rude.”

McKinnon straight up inquired if Eva thought the purpose of reading was to build in-group solidarity, a theory posited in other mock impoliteness research. She responded that she believed it was to “build a thick skin” (Hence the title of the paper. Thanks, girl!) because of the ostracism and slurs they receive from the out-group for being “over feminized” or a drag queen at all. In this case, the out-group in question is the broader gay community. Through Eva’s interview and the literature review on mock impoliteness, McKinnon conceptualizes the backstage as a safe space for drag queens to dish out and take insults in preparation for unsafe spaces.

(This is a personalized negative vocative, btw.)

He provides analysis and context from other parts of the transcript to demonstrate how the criticism was frequently something the drag queen was already self-conscious about.

He also identifies how the insults are perceived by the target as “allowable offenses” by identifying laughter, vocalization patterns, and cooperative turn-taking in the recordings thus demonstrating how they are mock impoliteness and not genuine impoliteness. Many of the topics (appearance, performance, etc.) the drag queens used to insult each other are also topics that they might receive criticism on from the out-group. McKinnon points this out as evidence for Eva’s assertion that reading serves to build a thick skin.

By taking a deep dive into the talk used in this intimate setting of a drag queen community this paper is able to offer up a nuance to the academic definition of reading. A read should target something the receiving drag queen is aware of and self-conscious about, so that it can accomplish the goal of building a thicker skin and arming her against the world. This paper applies mock impoliteness frameworks to show that developing in-group solidarity is not the whole story in why drag queens talk trash to each other.

Check the paper out for yourself if you’re a bish interested in queer linguistics or a pragmatics bish. (The transcripts alone are worth it.)