Effects of gender and verbal aggression on perceptions of U.S. political speakers

It’s the Year of the Woman 2.0, party people. A record number of women are running for office in the American midterm elections. We will see what happens in the coming hours, but it looks like we could soon have more lady leaders and legislators. What better time than now to read Charlotte Nau and Craig O. Stewart’s 2018 paper on how verbal aggression from men and women is evaluated in political speech?

First of all, this article was published in the Journal of Language Aggression and Conflict. The specificity of some of these journals tickles me. I hope they have a special issue for papers on Guys Who Lash Out After You Don’t Respond to their Messages on Tinder.

Verbal aggression is defined in the article in various ways by various smartypants people, but most definitions include an element of targeting the personal- looks, character, brains, abilities, identity, etc- rather than someone’s viewpoints. It comes in a variety of forms: profanity, putting a hex on someone, mocking, threats, or just regular old insults.

Most existing research in this area analyzes attack ads. Nau and Stewart are interested in verbal aggression in speeches and debates rather than media advertising, which is unlikely to have been written and often not even voiced by the candidate.

The first experiment compares male and female verbal aggression and the effect it has on speaker credibility, listener agreement with message, and perceptions of appropriateness. The researchers hypothesized that ladyfolk exhibiting verbal aggression in political speeches will be deemed less credible, less appropriate, less effective in their message, and overall more aggressive than menfolk doing the same.

Just kidding, it was more like, “You obviously don’t know what you are doing…” and “you’re a hypocrite.” Introductory information for each excerpt gave a fictitious name of the politician and their title as Congresswoman or Congressman thereby revealing the gender. Participants had to rate their agreement with the message, their perceptions of the speaker in categories of credibility and appropriateness, and their overall aggression.

The second experiment was largely the same, but to increase the salience of gender they included images of a  female or male speaker in place of the introductory information that said congresswoman/man. The paper explains the rigorous selection process of the photos and how they were randomly assigned and reassigned to speeches shown to different participants to minimize the effects of attractiveness and other factors on the research. I don’t want to bother with all that right now, so just trust me that it was legit.

From the first experiment they found that messages with verbal aggression were viewed more negatively overall than the messages that did not include personal attacks. This is consistent with other research in this area.

The results of the second experiment- with the pics- were pretty similar. Both men and women were judged more harshly for being verbally aggressive, but the effects were a teensy weensy more negative for women.

The authors concluded that there wasn’t strong enough evidence to confirm their hypothesis on gender differences. They theorize that in spite of evidence that generally women are judged harshly for stereotypically unfeminine behavior like aggression, there must be an exception for political speech where aggression is normative.

Well well well, I think to myself, vaginahavingly. These experiments didn’t yield the kind of headline-grabbing results which I can wokely plaster on my social media about women being unfairly penalized. But that is the thing about research- it can give us perspective on dominant cultural narratives bolstered with anecdotes.

Women’s voices are frequently picked apart as annoying for… reasons, but it seems that in political speech verbal aggression is not an area where we have a significant disadvantage relative to men. I think there’s room to learn more about this area, but until then… Trash talk away, congressbishes. People don’t really like it, but they don’t like it at similar rates in women and men. 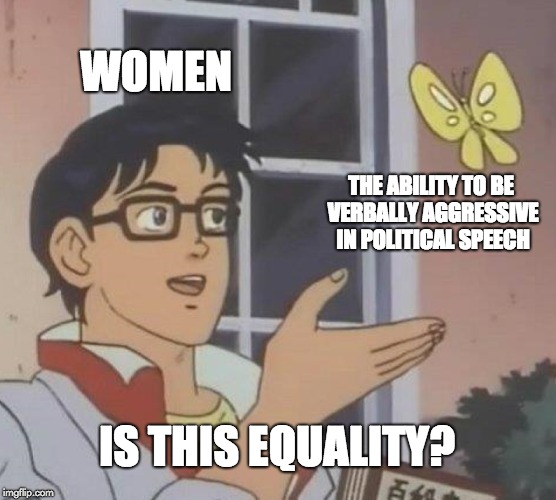 This paper is recommended for discourse analysis darlings and sociolinguistic sweetpeas.

IYIL Post 1: Colonial-Indigenous Language Encounters in North America and the Intellectual History of the Atlantic World