Learn a language, they said. You’ll be more desirable on the job market, they said. Everyone needs to be multilingual to be competitive in this globalized world, they said. Get that dinero, they said.

In education and work environments language is often characterized as a skill that can be leveraged in this little system we call capitalism. Dr. Nic Subtirelu is skeptical of this. In his 2017 paper, “Raciolinguistic ideology and Spanish-English bilingualism on the US labor market: An analysis of online job advertisements,” he unpacks how the rhetoric of language skills as human capital doesn’t capture the IRL economic experience of language minorities.

Subtirelu applies a raciolinguistic ideology lens to the issue. Raciolinguistics is exactly what it sounds like. It’s the study of the relationships between race and language- both how language is used to construct race and how race theory applies to linguistics. For example, people who hold antiblack and racist attitudes are likely to have a negative view of African American English (AAVE). For the record, AAVE is a legit dialect with its own sophisticated grammar and a unique phonology.

According to raciolinguistic concepts U.S. Latinxs are racialized and therefore their English and Spanish are deemed non-standard and ‘deficient’ compared to the English of white Americans or the Spanish of Spaniards.

Subtirelu argues that U.S. employers conceive of Spanish in two ways. First, It’s a world language, which has economic value because it could be leveraged in international trade to ganar dinero. (Mexico is one of the United States’ biggest trading partners.) Second, Spanish is also conceived of as a local language, which has economic value because it can be used to hablar con U.S. Spanish speakers in customer service scenarios. 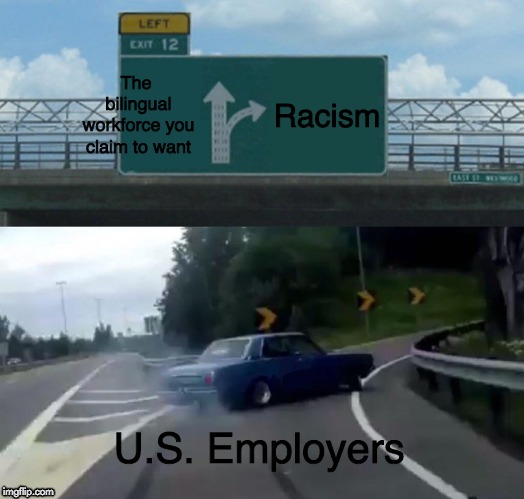 He pulled 74,000 job advertisements from an online job board to identify how many jobs prefer or require Spanish-English bilingualism. And what those jobs are. And the difference in pay between those jobs and similar jobs without bilingual requirements. And which job descriptions conceive of Spanish as a world or local language. And any difference in pay among those.

On average advertisements that did *not* mention Spanish had a higher salary listed than those that required or preferred Spanish-English bilingualism. Spanish was also more likely to be mentioned in ads that had low education and experience requirements. A matched sample contrasting jobs in the same states with comparable education and experience level showed that jobs that had *no* Spanish-English bilingual requirement paid an average of $3,500 more.

Digging into the jobs that require Spanish reveals even more not coolness. The handful of high paying jobs oriented to Spanish as a world language, with language about performing audits in South America, international accounting, international distribution, etc. The slightly larger number of middle paying jobs were primarily nonprofit and education jobs that oriented to Spanish as a local language. By far the largest group were low paying ($15,000-27,000) frontline customer service jobs that conceived of Spanish as a local language.

Additional uncoolness alert: the higher paying job ads were more likely to use language like speak fluent Spanish and the low wage jobs were much more likely to use the word bilingual. Subtirelu hypothesizes that the label bilingual was serving as a code for a more ‘nativelike’ authenticity than the label fluent and may carry some racial undertones. As an academic he has to hedge his impressions with qualifications and soft language, but we here at LinguaBishes are mere lowly linguistics groupies and I have no problem claiming with undue confidence that bilingual is probably code for Latinx in these ads and fluent was code for a suit who double-majored in accounting and Spanish.

While the job ads showed a demand for Spanish-English bilingualism, the most demand was in lower paying jobs that oriented toward Spanish as a local language and were probably recruiting Latinxs.

The electoral success of Donald Drumpf on a nativist platform, the botched federal government response to Hurricane Maria in Puerto Rico, and ICE ‘mistakenly’ detaining U.S. citizens that are Latinx are just a few signs that many whites don’t view Latinxs as sufficiently American. This research shows that this denigration extends to their bilingual skills, which are not financially valued in the job market despite capitalist rhetoric extolling the benefits of a multilingual workforce. 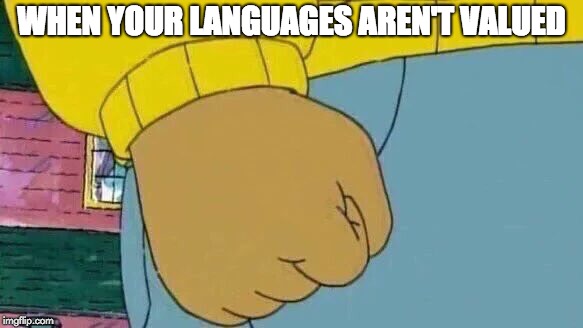 Though this has all been rather disheartening, it’s important for linguistic research to continue shedding light on whose languages and dialects have built-in privileges and who is given a pat on the head and a low wage job for their language skills.

This paper is recommended for bilingual bishes, sociolinguistics stans and anti-racists.

Dismantling the Native-speakerarchy Post 2: “The role of vowel quality in ELF misunderstandings”